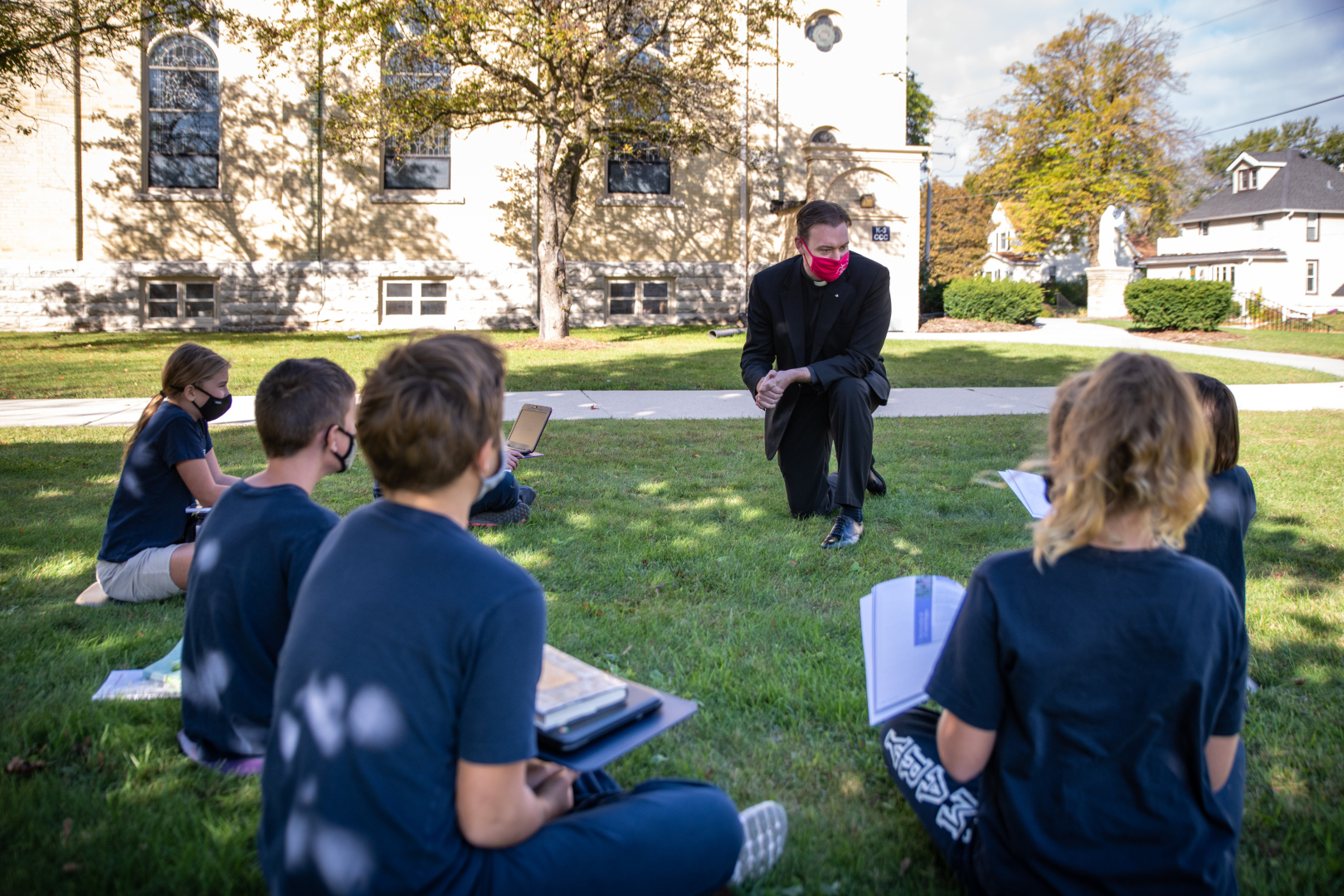 Before I was ordained, I wanted to make sure I had one vestment in each of the major liturgical colors--white, green, red, and purple--so I ordered them from the House of Hansen in Chicago and Granda Liturgical Arts in Spain.

My parents gave me the nicest vestment I own as an ordination gift.  It is hand-embroidered, and the symbolism is an image of the Trinity.  I celebrated my Mass of Thanksgiving (the first time a new priest presides at Mass) on the Solemnity of the Most Holy Trinity wearing this vestment, and will wear it on many of the Church's most important feasts throughout my life as a priest.  This vestment was also made in Spain by Granda Liturgical Arts.

Shortly after I was ordained, a friend asked if she could make me a rose vestment, since I did not already own one in that color and would only wear it twice a year (on Laetare and Gaudete Sundays).  I found the materials and she did beautiful work. 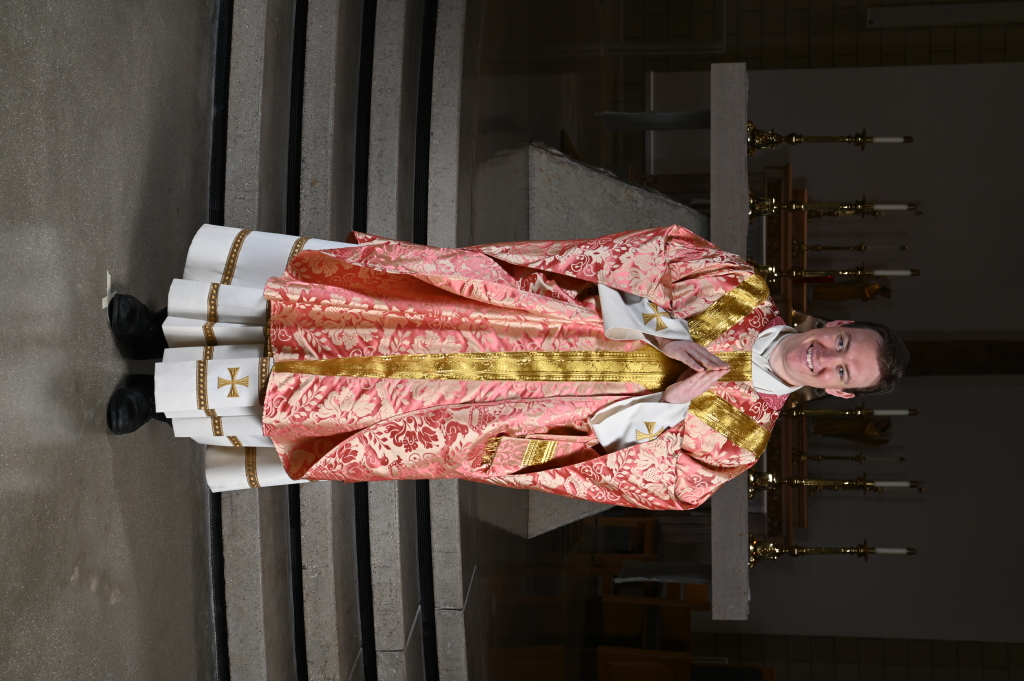 As I researched the kinds of vestments that are used in the Catholic Church and are available to purchase, I quickly learned that they range very widely in quality and price.  Many vestments are available in lower-quality fabrics with machine-embroidery that are beautiful and very inexpensive, but will wear out quickly due to the poor quality of the fabrics.  Higher quality fabrics are significantly more expensive, and depending on the cut, the fabric, and the quality of craftsmanship, the price-range for a beautiful vestment that will last for years runs from ~$600 to $3000.  Hand embroidery greatly increases the value of a vestment, because this art form is increasingly uncommon, painstakingly tedious, and will last for years if well cared for.  The most expensive single vestment I have encountered is valued over $15,000!  They are often sold in sets (including dalmatics--vestments for deacons--and copes and humeral veils) and those sets can be even more expensive.

As I learned all of this, I discovered that many antique vestments are available for sale on eBay, which is where I purchased most of the vestments not already described above.  Unfortunately I do not know the history of many of these vestments, but the oldest I know is from the late 1800's.  That one is not included in this collection of photos, but we may take a photo of it at a later time and add it to these.  At least two of these vestments have been restored by transferring the central embroidered or woven decorative panels onto new base fabric. 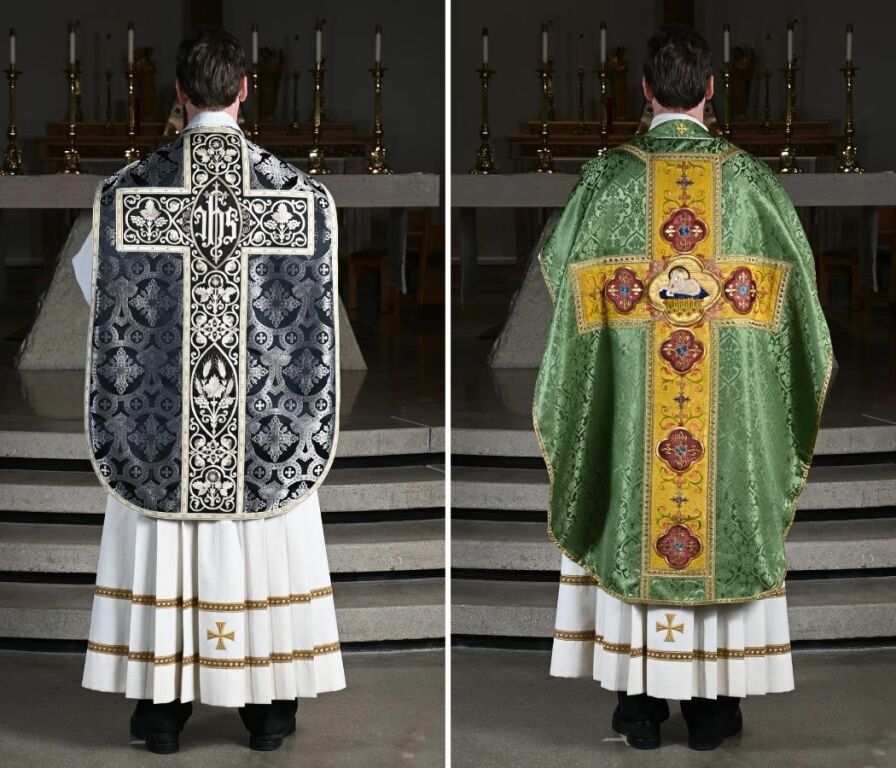 The different shapes seen in the different vestments are merely differences in style.  When, prior to the liturgical reforms that followed Vatican II, Mass was only ever celebrated ad orientem with the priest facing into the sanctuary, it was very common for the back of the chasuble to be beautifully decorated to help draw the faithful more fully into the mysteries being celebrated.  Even though they could not see what the priest was doing with the host and chalice, they knew what he was doing, and the symbolism and imagery displayed on the vestments offered a beautiful aid to meditation on the mysteries of our faith.